Carrying on from my post about the roles on page 1 of NFU Mutual’s ‘Handy Guide’ to who’s who in the claims process, I’m now analysing page 2 of the Who’s Who guide which can be found on the NFU Mutual’s website here.

I’ve written this analysis of the handy guide as part of my explanation into the dishonesty used in our insurance claim. This post carries on from Ten Lies the NFU Mutual Told Us. Later, I’ll go deeper into each aspect of these people and our experience with them. Analysing the who’s who and other aspects of the documentation is puzzling. It’s becoming clear that the more I unravel our insurance claim, the stranger things get…

We may ask a Forensic Expert to investigate the immediate aftermath of any incident. During their investigation they will secure evidence and provide us with a detailed report on what has caused the damage which can assist in future loss prevention as well as pursuing any person who might be responsible for causing the damage. Should a recovery bec onsidered viable, you might be required to assist with the process. As with loss adjusters their fees are paid under the policy separately to your claim.

This seems quite straightforward. Forensic experts did inspect and investigate and then submitted their reports. But, their advice wasn’t always followed. How important is a forensic experts recommendation?

Your surveyor may require the assistance of a project manager. This person directs and controls the works on site, ensuring that each of the contractors comes to site in the correct order with the correct materials.

The loss adjuster will need to agree the extent of the involvement and fees of the project manager in advance of any instruction.

A Project Manager was not appointed on our claim. Therefore, it stands to reason why the builders just went ahead and did ‘their own thing’. No-one directed or controlled the works. The materials used were inappropriate for a listed building. The builders should have been monitored so that the proper work was carried out. Instead, the walls were closed up and plastered before anyone had a chance looked at them. Who’s fault is this?

A more worrying aspect of this is reapir work carried out in the loft. The structural engineer hadn’t inspected early on in the works, contrary to the architect’s recommendation. Why? Something serious happened and alternative structural engineers – not experienced with listed buildings were brought in at short notice.

Later, another structural engineer asked: Why has structural work been carried out in the loft space when it was the sole plate that failed?

A surveyor is used in the design and costing of a major repair or rebuilding project. They are instructed by you to represent your interests particularly with regards to building regulations, health and safety issues and compliance with legislation. They will liaise on your behalf with the loss adjuster, ourselves and a number of contractors from whom detailed quotes will be obtained. You may wish to contact a surveyer you have dealt with previously or you can contact The Royal Institution of Chartered Surveyors by visiting www.rics.org.

It is important to ensure that, whichever surveyor you choose, they have experience of working on your type of property e.g. listed building. Your surveyor will provide you with details of what they will be able to do for you, along with a schedule of their charges. Your Buildings Sum Insured includes an amount to cover these costs and your Surveyor will agree their costs in advance with the loss adjuster.

Well, this who’s who takes the biscuit! We had no control over the surveyor at all! He was appointed by the Loss Adjuster – not us! At no time were we given the opportunity to appoint our own. If the surveyor represented our interests, he should have:

The surveyor did not liaise between us and the loss adjuster and NFU Mutual. In my opinion he plotted with the loss adjuster to coerce us. Together, they came into our home after meeting in private to present items for our approval. However, looking back, it’s clear that they coerced us into agreeing to things we now know we shouldn’t have agreed to.

Luckily, we have this on video.

I believe there is something suspicious about the relationship between the surveyor and the loss adjuster. I intend to get to the bottom of it!

Contractors are employed by you to undertake the works. They will provide a schedule of works or detailed estimate which will be approved by your surveyor (if one is instructed) and by the loss adjuster. Once the costs have been approved, we can either obtain a signed agreement from you which allows us to pay them directly, or we will pay you the agreed amount for you to pay your contractors.

The builders. This Who’s Who explanation is a little trickier to explain. When the surveyor and the loss adjuster came to visit us in June 2019, they had already chosen the builders. This is where things get a little ‘fishy’. Why was there was no tender process as promised? Also, both the surveyor and the loss adjuster recommended them as ‘reputable and experienced’.

Solicitors may be instructed to provide legal advice, mainly arising out of contractual disputes and potential recoveries. Their costs are payable by us and their fees are paid under the policy separately to your claim.

Why oh why have we never been told about this? The NFU Mutual have blamed us, somehow, for not agreeing to have their contractors back to resolve the damage they did. When all the time they could have:

What on earth is going on? Why has this never come up as an option?

The loss adjuster or your surveyor might suggest that an Architect will be necessary. An architect is responsible for designing and planning building work, especially if it requires liaising with local planning officers. If you’ve not used an architect before, your surveyor might be able to suggest one or alternatively you can approach the Royal Institute of Architects at www.architecture.com. As with surveyors, you need to be satisfied that the architect is experienced in the type of building you have. Once chosen, details of their fees will be agreed in advance with the loss adjuster. Their fees are included in your buildings sum insured.

Again, we had no choice of Architect. He was chosen for us and was appointed to draw up the specification of works and liaise initially with the Conservation Officer over the listed building consent.

Issues arose later on in the claim when the surveyor accused him of wrongdoings but later retracted his accusation. The architect was not appointed as he should have been to approve the works taking place. He had not been paid by the surveyor and he wrote to us on several occasions advising us of the potential problems which could arise because of the legal implications.

These agencies have a responsibility to provide expertise on listed buildings, conservation areas and the historic environment in their respective areas. They have to find ways of accommodating the modern requirements of building regulations within historic buildings without compromising the special interest that the building represents. They have the power to require repairs to be done in a certain way which might be at odds with your requirements. It is important that any works proposed receive their approval.

The NFU Mutual and the people working for the NFU Mutual on these pages ignored this. Why? They allowed their builders to damage our cottage, some parts beyond repair, and then covered up the fact it had happened. Until the Conservation Officer got involved.

Following advice from an independent structural engineer, it fell to me to contact my local Conservation Officer. I informed him of the damage that had taken place on a listed building and he and a colleague came to inspect the work. Subsequently, a caution under Section 9 of the Planning Act 1990, was issued against the claims handler working on my claim at the NFU Mutual.

After it became apparent that the builders working on the cottage had not carried out the work to the specification, I asked for a second opinion from the structural engineer. He had originally wrote up the plans for the cottage and was supposed to have inspected the cottage at regular intervals. But, he hadn’t inspected. He was not instructed by the surveyor until things went wrong.

When my request for a second opinion was granted in November 2019, the structural engineer was horrified by what he found. He wrote a detailed report, condemning the repairs. He said that the work was so poor, in his opinion it needed to be ripped out and started again from scratch. Shockingly, this report was buried and a ‘revised’ report was issued. This new report was based on bodging the works to incorporate the poor and incomplete workmanship carried out by the builders.

Our home has been standing without complete sole plates for more than three years. It is structurally unsafe as both the structural engineer appointed by us and the original SE (before he was forced to change it) confirmed.

You might be approached by one or more firms of Loss Assessors offering to represent you in your dealings with us. You are, of course, entitled to retain them. We are pleased to say that the majority of our members feel no need for this representation. If you do retain their services you will still need to document your claim and be involved in the process. Their fees (which can be as high as 10% of the claim) are NOT covered by your policy and you will have to fund these costs yourself.

The last role on the handy guide to Who’s Who relates to a loss assessor. We were unable to appoint one as their fees amounted to 10% of the claim. In our case this would have been £16,000 – £20,000. These fees were not covered under the policy and we did not have the money to hand.

At any rate, we trusted our insurance company to carry out the appropriate repairs as promised. It should not have been necessary to need this type of expertise.

So, this is the first analysis of documentation I’ve done. The Who’s Who Handy Guide doesn’t relate at all to our experience with our claim. But, it’s been very enlightening! Why were we treated so differently to how the page says we should have beeen treated. Why weren’t these people working in our interests?

I wonder what else I shall find when I look into other documents. 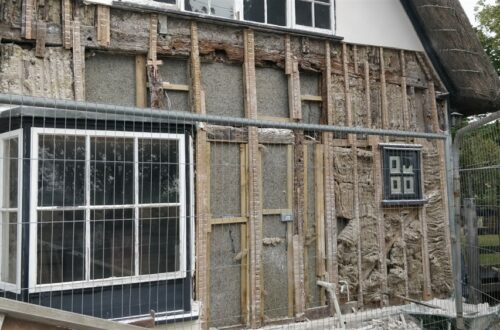 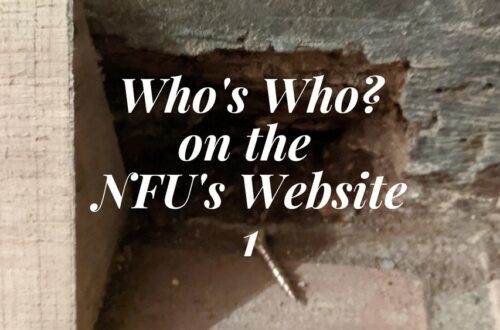 NFU’s Response – After we sent them Evidence of Corruption