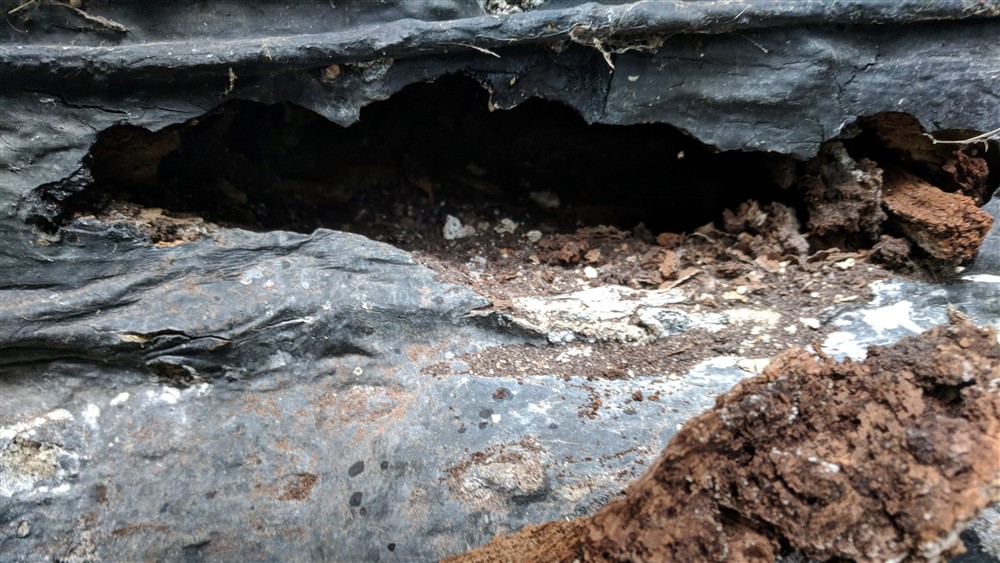 It’s time to tell the whole story from start to finish (if it ever does!). From the day I found the hole to now. I hope it will be a warning to others so that they don’t end up like me. I don’t really think I could have done anything differently, but then again, I was never in control. The problem was, that we put our trust in a very expensive insurance policy from what we thought was the best insurance company for a house like ours, and I felt safe.

But over the last three years, safe is something I have never felt. I have been threatened, bullied and lied to by so many people. We were ripped away from the home we loved, for what we were told would be six months. But it’s now coming up to three years, our beautiful cottage is decaying before my eyes and we’re living in a rented house. We’ve spent three miserable Chistmases there and we’re now wondering whether we’ll be there for a fourth.

I hate the rental house so much I can’t bear to go back there each night. It has no soul, no charm. I don’t belong there – it’s just not mine. I can’t hang a picture or paint a wall. Don’t get me wrong, it’s a beautiful house but it’s just not mine. It’s nothing like a house I would choose now and I hate the impermenance of it all. My counsellor says it’s because of my childhood – we moved around every couple of years and it has affected my sense of safety and belonging. I need peace and stability.

But there is no stability when half of your belongings are still in boxes. When you work from home but need to spend an hour a day travelling. The sofa won’t fit into the rental house so it has been left back in the cottage. There’s no peace when you don’t know what your insurance company are going to tell you or demand next. And you have no idea how long the next battle will take or when (or even if) you’re ever going home.

Peace doesn’t come easily when you chose to live in the quiet countryside, but now your next door neighbours make as much noise as they like, whenever they like. The neighbours the other side have moved out! He plays the drums every day and the family take over the whole neighbourhood by spending all their time in the garden as soon as the sun comes out playing music and entertaining. They even had a proper band perform once! God, I sound awful! I promise I’m not usually like this! I love a good get-together, just not when I’m forced to listen to it from the other side of the fence and the inside of the house!

A Bit of Background

When this all began, we had been living in the cottage for three and a half years and we’d loved every minute of it. The countryside and slower, friendlier lifestyle was perfect for us. Every morning I’d open the curtains and look out at the breathtaking view from the bedroom window. Every day the view was different. I always felt so lucky to be living in this gorgeous little cottage and never, not for one minute, did I ever take it for granted. It was my little piece of heaven. For the first time in my life, I felt like I was really home and I was meant to be here.

My husband, Mark, is an easy going man and he loved the cottage too! We spent winter evenings in front of the open fire, watching the flames and episodes of Game of Thrones. I enjoyed cooking family meals in eating them all together up the table in the cosy kitchen. We planned for how we were going to redecorate each room and landscape the garden. This was our forever home and we wanted – we expected, to grow old and retire here.

Part of a Community

We had become part of the village community. Firstly, by joining the Neighbourhood Plan Group to stop unnecessary houses being built in the village. Mark and I both helped with the admin involved in that. Then I was asked to join the Parish Council, which I did for three years. I was the chairperson for the village footpaths and fronted a campaign to reduce dog poo pollution! That was quite an eye opener! I also made the village website and joined the committee for the Stowupland History Group, since I have a degree in history and loved finding out about the history of the village and even my ancestors! I even did a talk once about the five generations of my family history in the village! Later, I took over the role of Village Recorder. I did twice weekly fitness classes at the village hall – AND liked it!

The village was my life and I felt as though I belonged. I met loads of wonderful people and loved feeling part of something.

That’s all over now. I’ve lost conatct. I feel like I don’t have a home, I’m just drifting and waiting. I don’t feel as though I belong anywhere.

So lets begin where all this started – the day I found the hole.

It was November 2017. It must have been a Tuesday morning because I was pulling out the wheelie bin ready for the ‘bin men’. Something caught my eye, and when I bent down to look, I saw it was a hole. Very worried, I took the photo above.

I remember feeling my stomach churn. All sorts of thoughts went through my mind. How bad was this hole? Was it just this hole or did the problem go further? Up the walls? Under the floor? When I poked the hole a little more it was even more horrifying. Behind this paint, there should have been a huge old oak beam. Where was the sole plate? There was nothing there! Only a powdery void.

If it was really bad, was the insurance going to cover it?

We didn’t have much money for emergencies. They say that these old houses eat money and ‘they’re’ not wrong. When we first moved, we knew there was work to be done. We had a little money for improvements but the previous owners hadn’t been entirely clear about the condition of the cottage. Sadly, all our improvement money was blown in the first couple of months of living there – just by doing repairs and getting the cottage liveable.

Then, we needed to re-ridge the thatched roof. You wouldn’t believe how much these thatched rooves cost to maintain!

So, what had happened under our home to make a hole in the sole plate? To know why, we had to go back to April 2016. My next post reveals the reason for the hole.

Can you see that the paint was covering the problem? It was actually part of the problem! In a lot of old buildings thick, bituminous paint was used to ‘decorate’ the sole plates and bricks. This is a terrible mistake. When this happens, the building is suffocated, the wall can no longer breathe and damp and water are trapped beneath the paint. The walls, wood, or bricks behind the bituminous paint start to rot, and by the time you find out, it’s too late! Only breatheable paint should be used on old buildings, so it can behave as it was originally intended.

My next post tells the story of the origin of the claim. 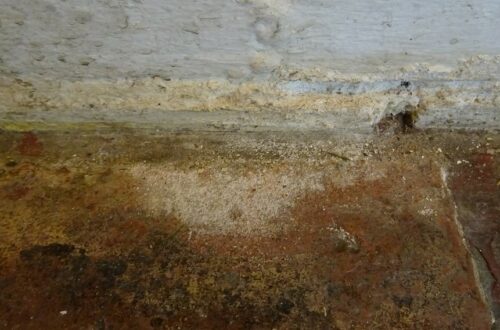