If you’re following the timeline, you’ll know that my last post related to the original flood. Here, I’m talking about the first investigations. It was after pulling out my wheelie bin in November 2017 and discovering the hole, detailed in my first post, that we knew it was time to go to our insurance company. We approached NFU Mutual, by email, through their Lavenham Agency on 9 November.

They said they would send along a Loss Adjuster from a firm based in Ipswich. They said he would: ‘…be able to meet with you at your home and investigate the causes for the damage and provide hands-on guidance and resolution to the claim.’ If only that were true…

A few days later on 14 November 2017, the first investigations began. The loss adjuster came to see what was going on. But the visit was quite worrying. It is, after all, a Loss Adjuster’s job to save insurance companies from paying out if they can. Obviously, we had no idea what was going on underneath the flaking paint or for how long – who would? The only thing we had was the original purchase survey which said the cottage was ‘remarkably dry’. But would this be enough for NFU Mutual to accept the claim? The Loss Adjuster wasn’t sure. He said:

The sole plate does appear to have rotted away in the area that has been identified. However, there is the possibility that this damage may be historic and not have been seen by the surveyor who undertook the purchase survey. This would have been due to the area having been painted over.

He told us that a local building consultant firm would be coming to inspect the damage. They could provide an expert opinion in a report which would let us know where we stood. He also stated that another company would be attending to inspect the internal damage.

Waiting to Hear Back

A month passed and we’d heard nothing about these first investigations. It was a really tense time. What was happening? In the end, I chased up the Loss Adjuster. It wasn’t until the 19th December that we finally got our answer. Thank goodness! We were covered. The report confirmed that the west wall sole plate needed to be repaired. The loss adjuster said that we could appoint our own surveyor. He told us that the surveyor’s job would be to prepare a specification of works, get competitive quotes and oversee the works to completion.

We knew nothing about this sort of thing, but a neighbour who lived in a similar property had given us advice before, so we asked him what we should do. He was a professional lime plasterer and he said he knew conservation specialists. He said he could recommend a person who would be able to manage the works and get everything completed. But we didn’t know this person was his colleague, nor that he wasn’t qualified to do the job.

Eventually, we were allowed to see both the reports from these first investigations. The water testing company report was quite straightforward. It just confirmed that the water had travelled in a straight line, down the west side of the cottage. No other areas were inspected. It also confirmed that the water had tested as mains water rather than water that had seeped up from the ground.

The Building Consultants report was actually our first Structural Report. The first of many we’ve had over the last three years. I’m sure we’ll need to get more to prove exactly what has happened since all this began. Here are a few interesting observations from this report:

Conclusion from the First Investigations

So, the results of these first investigations seemed quite simple and straightforward. Investigate to see if there are any more leaks and if there is, fix it. Take off the internal affected plaster. Dry everything out using suitable machinery. Repair or replace the damaged sole plate. Replace the modern damaged plaster with lime plaster.

Oh my goodness! It’s so strange going over all this information now. This stuff happened almost 3 and a half years ago and we had lived in the cottage for three and half years. It’s so depressing, by the time our home is put back together and we can move back, we’ll have been out for longer than we were in.

As I write this today, again we’re waiting to hear back from the Claims Department. It’s been over a week since I wrote to them asking for a new specification to be prepared by their architect. This was a compromise on our part as nothing is happeneing and they’re not budging from giving us less than what it will cost to repair the cottage. They were refusing to agree to a new specification as it would cost too much money. This makes no sense as they’re wasting £1,250 a month on the rental accomodation. They’re still saying that they don’t believe how bad the cottage has deteriorated, have ignored all our evidence, but haven’t sent anyone to look. If they don’t agree now, then there’s something very wrong with all of this. 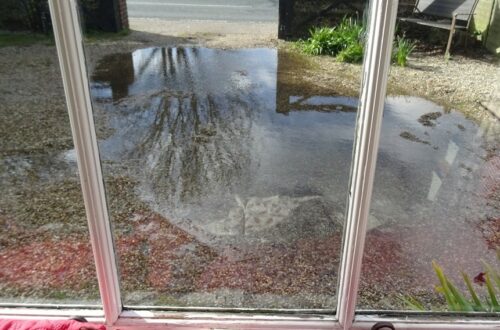